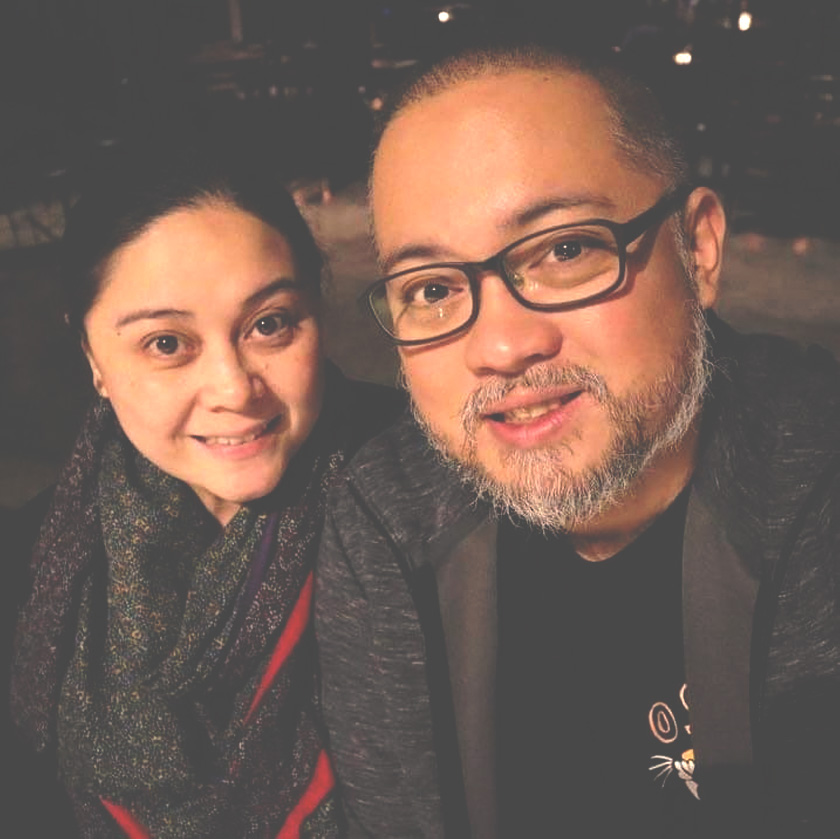 NewsFeed 360 gets a rare chance of having a fun, colorful conversation with journalists Kap Maceda Aguila and Joyce Reyes Aguila, allowing readers a glimpse of their dynamics as two writers in a loving marriage.

There is no escaping the bylines of Kap and Joyce Aguila owing to their years and wealth of experiences as published writers of the top broadsheets and magazines. Kap is the Motoring editor of Business World while Joyce regularly contributes stories to People Asia, Manila Bulletin, The Philippine Star, Esquire and ANCX.

NewsFeed 360 turns the table on the pair, however, in a virtual session that resembles a teatime filled with interesting anecdotes and nuggets of wisdom, plus a whole lot of teasing and hilarity thrown in as the couple tries getting used to fielding questions instead of asking them.

Driven by her mom to read the newspapers to support her dream of becoming a writer, Joyce – then a senior college student – was very well acquainted with Kap’s body of work as Sunday columnist of The Philippine Star. She sort of already had a crush on him based on how he writes and the photo accompanying his column.

They would later meet at a writing seminar, with Kap admitting that he also found himself attracted to Joyce. He didn’t think much of it, though, since she was nine years his junior. Still, the pair decided to give it a go and went out on a date.

“From there, nalaman namin that we have a lot of things in common and formed this connection—we talked and laughed a lot. Back then, it would be hard for someone my age and her age to have something in common but it helped that we are both writers,” Kap says.

Beyond romance, Joyce considers Kap her work and life mentor as well, learning a lot about the profession because of him.

“When it comes to writing, grabe yung discipline nya. For instance, sometimes ayaw kong magsulat but he would always tell me that one article can make or break you. He says, ‘You’ll never know if someone googles your name and natapat sa work na you didn’t give it your all.’ He also instilled in me the discipline of respecting your subject by making preparations and researching prior to an interview,” Joyce shares.

“Lalo na when we got married and he would joke around since I carry ‘Aguila’ already. He would tell me about the dignity of work, saying no to envelope journalism, being on time and going to events not because of the freebie but because you are going there to write about the topic,” she adds.

“She’s probably nerdier than I am when she writes. She can write about something very technical yet she’s able to express it very easily and naiintindihan. Napansin ko kapag natuwa siya sa subject and interesting kausap, mabait and very open, it translates to how the article is written,” Kap starts.

True to his mentoring nature, Kap shares a meaningful advice to writers who find themselves in situations writing about something they’re not passionate about.

“Hindi mo obligasyon na pagandahin ang subject mo if there’s nothing to it. Ang obligasyon mo is to your reader and to yourself. If nagsusulat ka lang ng topic na gusto mo or invested ka personally, paano na the rest of the opportunities where you have to write about something na hindi mo feel or a subject na hindi cooperative? You cannot afford to drop the ball. Once you have a byline, you have to do yourself justice,” he says.

“She’s more reliable when it comes to deadlines and that’s what I’m also trying to practice. Kapag alam niyang may deadline siya, uupo siya and she’s going to finish it,” he notes.

Joyce, on the other hand, loves Kap’s ability to stir emotions in her with the articles he writes.

“Through the years, Kap would always have a feature na maiiyak ako or may kilabot sa last paragraph niya. There’s a certain warmth to it. I just connect with the way he writes. I like how he narrates a story. I would read him and wonder paano niya nagawa to describe it and tell the story. I have to learn pa from him about storytelling. I think lahat ng writing habits ko, I modeled after him. Idol ko siya magsulat,” she explains, proud of her husband’s talent.

While both have written about a wide variety of topics, the two shared that their favorite task would have to be profiling and interviewing people.

Her all-time favorite interview was the one with Gary Valenciano. “He’s just so sincere and nagulat ako na for a person who has achieved so much in life, ang simple ng nakikita niya in his future: mag-piano sa malls and nobody will notice him. He just wants to be a person who plays music while people go about their lives,” Joyce narrates, sharing that the singer later approached her at an awards show and thanked her for including that detail. He said he has been sharing that in many interviews through the years but it only saw print with the story she wrote.

“Favorite ko interviewees na hindi nagmamadali. They don’t hurry you and they make you feel important, not in a patronizing way, but siguro alam lang nila the role that you play in featuring them. These subjects are the ones who look beyond their photo session,” Kap shares.

He mentions the late Senator Raul Roco as one of his favorite subjects and how the senator went out of his way to treat him well, invited him to his office and even to his home.

“He was leisurely talking to me in that interview and ang galing ng experience. It’s always nice to have that challenge and pressure on how to represent the subject well because he’s so communicative, friendly and answers all your questions,” he says.

Kap also loves his interview experiences with Senator Juan Ponce Enrile for his photographic memory and Washington Sycip for being sharp despite his age.

But how do they deal if an interviewee is being unpleasant and difficult?

Kap adds that it will certainly find its way in the story.

“Writers set the tone and impress thoughts on the public kung ano ang iisipin nila sa ‘yo. If you are not nice to the writer, they can convey that in so many words. Hindi lang masyadong obvious,” he says, half-joking.

Was there ever a time that they have argued over work?

“More of how stressed we are with each other’s work. For example, four hours kaming hindi nag-uusap because of work and then you’ll talk about dinner tapos may konting iritahan kasi you don’t know what each other is going through,” Joyce shares.

While they are each other’s fans, not critics, someone also has to say when a line isn’t working. Though they would argue when they feel very strongly about what they wrote, the couple sees it as a good exercise to test the logic of their work. It’s like having another set of eyes to go through one’s piece.

Because of the pandemic, the couple also made some adjustments to their work and personal lives.

“I depended on him more to get through this because during the early part of quarantine, I was so emotional lalo na I am not seeing my family. He comforts me and assures me. Otherwise, we’re good. We make a good team,” Joyce shares.

“Ang saya ko when we cook together because [pre-pandemic] we never had the time to cook at home before. I also appreciate that we get to have long conversations and have positive thoughts about things we did not regret doing like buying this or going on a certain trip before this happened,” she adds.

Kap, on the other hand, felt the transition in his media work brought about by the pandemic.

“Ang nakikita kong adjustment is leveraging the digital medium and finding ways to be productive at home. Challenging pero what I’ve been able to do is to pivot and host webinars. It’s also about reinventing and learning new skills you wouldn’t have thought about doing before,” he notes.

The Aguilas went about their quarantine life working, cleaning, watching news and NBA, and their newly acquired habit of watching Korean dramas.

Kap shared it was him who got into K-dramas first.

In a grand display of character development, Joyce didn’t say much except for “Ikinakahiya mo na ba ako?” and excitedly asked Kap to reach out for something. She then showed off her Lee Min Ho, Park Seo Joon and Hyun Bin facemasks, saying these were being sold for a good cause.

Asked on things they wish people know about them, the couple took the opportunity to explain something crucial to the industry they’re in.

“People always get the impression na we’re bringing each other to a presscon because we want to take each other sa event. But he’s actually going to be working elsewhere. Hindi ko siya dinala to eat or to get a freebie. It’s a no-no for us. It was more for convenience because he drives me to work or he needs to have someone to talk to kapag traffic. After an event or presscon, we usually go on dates. Unless we’re invited together, kung sino lang ang may invite, siya lang ang papasok sa event,” Joyce carefully explains.

“I want people to see us as different people who are both writers in their own right. She has her own thing and I do, too,” Kap pensively states.

Speaking of them doing their own thing, both Joyce and Kap generously shared something not a lot of people know about. Joyce apparently has a day job doing HR analytics for a BPO company, while Kap has music and bowling as his other interests.

“In my work, we study what the numbers say about why people stay or leave the company, why people accept job offers or how women compare to men in the company. Writing helps me relax because my work can be very stressful. It doesn’t feel like work when I write,” Joyce beams.

“A lot of my friends know I’m a competitive bowler. I also play drums and guitar and I used to be part of the band Wagitay. I used to have a punk band in the mid-’90s which I used to front and we performed on Mayrics and Club Dredd,” Kap discloses.

There were a lot of off-the-record conversations and namedropping with Joyce and Kap in this interview that, sorry to say, will never ever see the light of day. Ponder on this thought as you listen to a Spotify playlist of Wagitay. Yes, those vocals are Kap’s.

About the Writer
Grace C. Diez

We are here to help. You can utilize these stories on your platforms.

CONTACT US
Processing…
Success! You're on the list.
Whoops! There was an error and we couldn't process your subscription. Please reload the page and try again.

iThere are no comments